Morganite has risen to popularity in recent years in the wedding jewelry industry. With notes of orange and pink throughout the stone, the morganite's recognizable peachy or salmon color has captured the attention of bride's & grooms to-be. With larger crystals, this has created a standard for morganite's to have larger carat weights, making a beautiful and bold statement. Named after the famous financier, and gemstone enthusiast, J.P. Morgan, the morganite has become a popular alternative gemstone for an engagement ring. One of the most appealing combinations for a morganite wedding ring is a rose gold setting and a morganite center stone. With that, we introduce the Morganite Collection at My Trio Rings for the modern couple's love story.

What Is A Morganite?

Morganite is known to promote communication, emotions, femininity, patience & to nurture love. All of these characteristics combined make a beautiful sentiment behind a morganite engagement ring.

Morganite was first discovered in 1910 in Madagascar (this location is home to some of the finest quality morganite). When trying to name this new rose colored beryl stone at a meeting for the New York Academy of Sciences, the very man who inspired the name for Kunzite (George Kunz) voted for the stone to be named after J.P. Morgan. In the early 1900s, he was known as one of the most important gem collectors. This proposal to name the rose beryl after Morgan was intended to honor Morgan's support for the arts & sciences, his donation of gems from his personal collection to the American Museum of Natural History, NY.

Morganite is a member of the beryl mineral family (a cousin of emerald and aquamarine) with a color ranging from orange to pink, often referred to as salmon or peach. The chemical composition of morganite is Be3Al2Si6O18. The subtle pinky-orange color of morganite is caused by the traces of manganese found in its composition.

When mining morganite, it typically comes from solidified magma-released fluids known as pegmatites. A large portion of the morganite gemstones found in the jewelry market come from pegmatite mines located in Minas Gerais, Brazil. Other locations where morganite has been found include Afghanistan, Madagascar, Mozambique, Namibia, and the United States of America.

Morganite has recently become a very popular alternative to a diamond engagement ring, as it offers a larger look for a more affordable price. 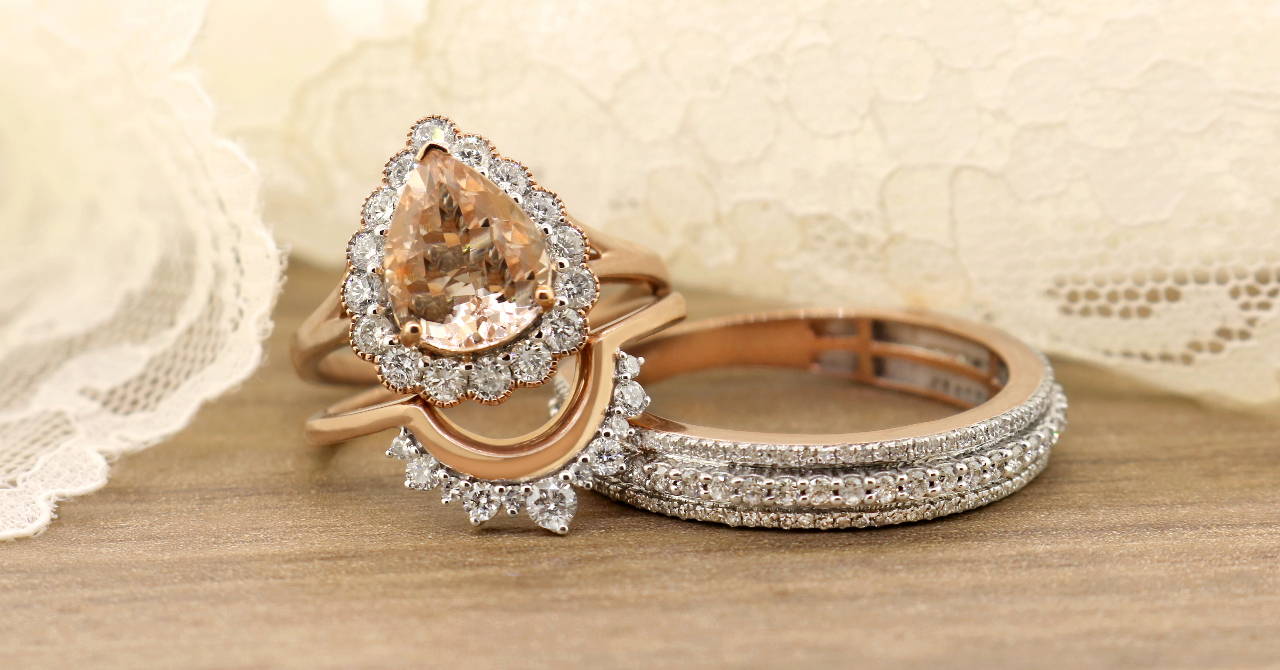 How Is Morganite Graded & Valued?

According to the GIA, the colored gemstone grading system is broken down into three components: hue, tone & saturation. The hue refers to the basic color we see when we look at the stone. Tone is defined as the lightness or darkness of a gem. When written, the value can range from 0 (colorless or white) to 10 (black). Saturation is the intensity of a gem's hue, or color. The value of saturation when measured on the color grading system is measured on a scale from 1-6 (6 is associated with gems that are more saturated or vivid in color). Morganite's color can be pink, purplish pink, or orange-pink and often light in tone. The stronger the pink hues of a morganite, the higher the color quality of this gemstone.

Morganite that is faceted, despite their light or stronger color hues and tones, usually has no inclusions or blemishes that are visible to the naked eye. 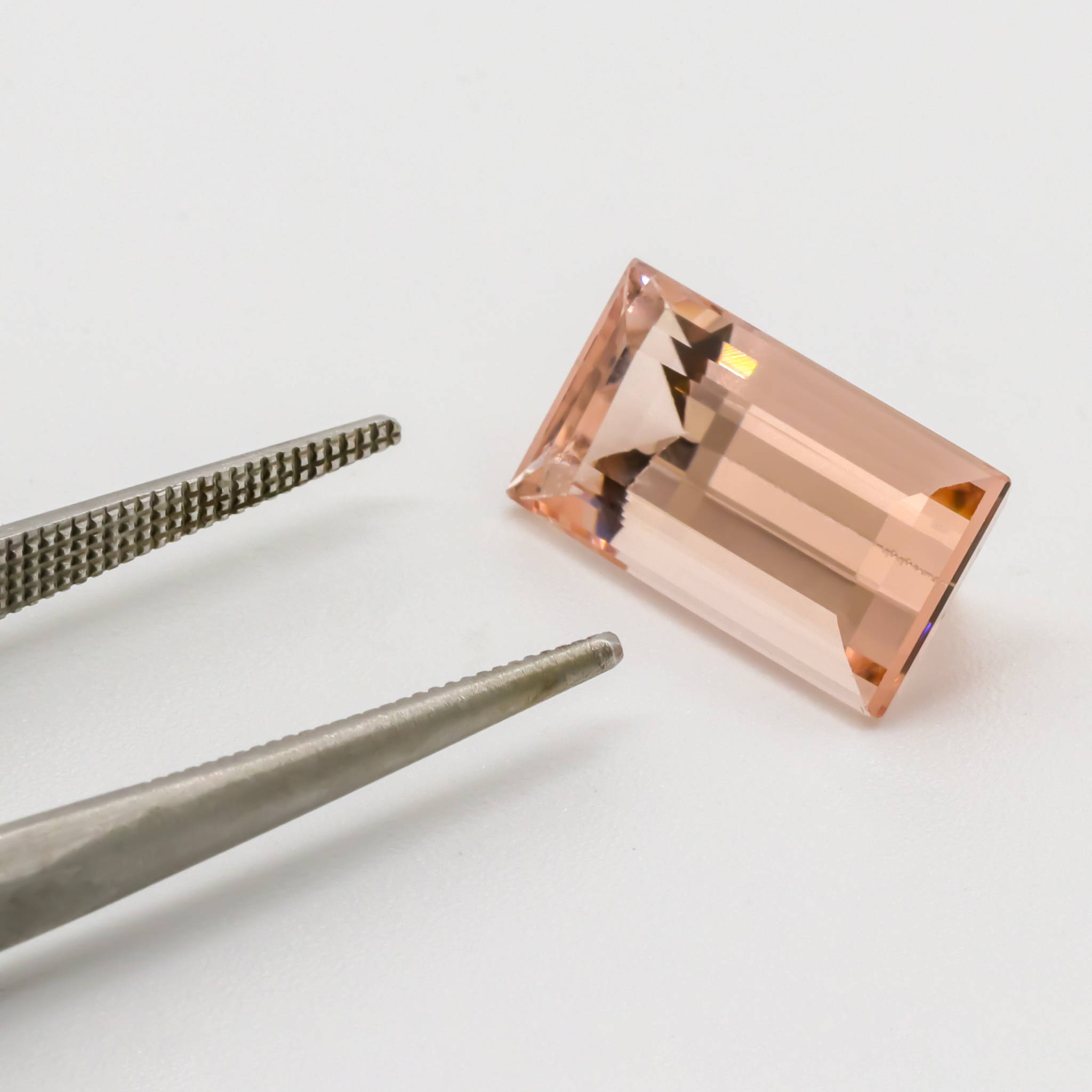 Morganite comes in a large range of sizes (this includes large faceted gemstones and designer gemstone cuts). Since the crystals of a morganite can be very large, this creates larger faceted stones which is more common in morganites than other gemstones. The larger the size, the stronger the color is shown.

If a morganite is lighter in color, the cut of the stone will be made deeper to intensify the color of the gemstone. Since morganite has distinct pleochroism (pale pink - deeper bluish pink), the rough of the stone must be strategically oriented for crafting. It can be cut in all standard shapes and sizes & unique designer cuts.

Our Selection Of Morganite Gemstones

The Morganite Collection by My Trio Rings has been designed to bring you everything the modern couple is looking for; a beautiful look, matching designs, & affordable prices! Our selection of fancy shaped morganite gemstones are curated with tones in the pink range of the orange-pink color range. This collection allows for a bigger look on a smaller budget, and has paired these beautiful morganite engaegment rings that exude romance with decorative diamond ladies bands and matching men's wedding bands.

How To Care For A Morganite Gemstone

To know how to take care of a morganite gemstone, we must understand its durability and what affects its color & structure. On the Mohs hardness scale, morganite ranks between 7.5-8. This means that morganite is a durable gemstone for everyday jewelry such as engagement rings, but just like anything we wear on our hands, a morganite ring should be protected from scratching and being knocked against hard surfaces.

It is not recommended that a morganite be exposed to heat. However, if exposed to light, the color of a morganite is stable and will not fade. You should avoid exposure to hydrofluoric acid as this substance will attach the morganite's composition.

When cleaning your morganite wedding ring, it is recommended to use warm, soapy water. If the stone has liquid inclusions or fractures, you should avoid cleaning by ultrasonic and steam cleaners. Otherwise, it is safe to use ultrasonic or steam cleaners.

Why Choose A Morganite Engagement Ring?

Saying "I Do" with a morganite engagement ring has beautiful symbolism behind the grand gesture with this romantic gemstone. Learn more!